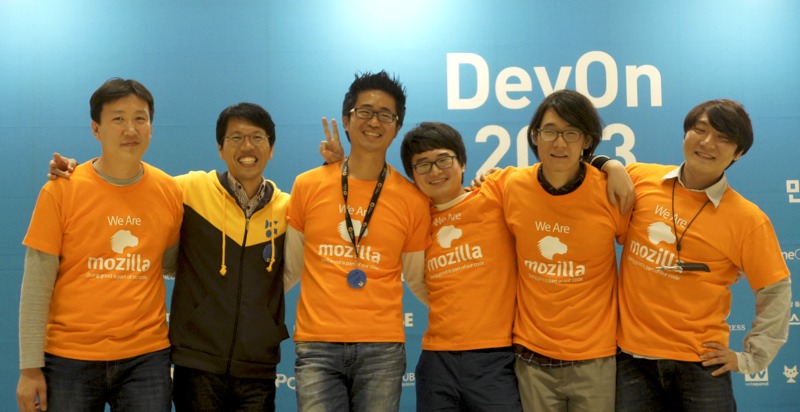 On 26th and 27th OCT, Mozilla Korea Community participated in DevOn 2013 held at COEX. This year’s DevOn has a new format so that communities can make display booth and technical meet-up session. Many developer and open source communities in Korea participated this event. Mozilla Korea Community also made a booth and introduced community activities.

At Mozilla Korea Community booth, there are Firefox OS phones, Firefox Metro and Firefox remote debugging demo and many attendees are interested. It is impressive that some people has a lot of knowledge about Firefox OS. Many people has shown their intrest about Firefox OS.

There is a meet-up place near to community booth. Soowong Seul and other community members have a Firefox OS App training session. About 10 survivals have time to look into Firefox OS and make a web apps. It looks if developer has a good web technique, it is easy and fast to make web app with Firefox OS.

As a parallel event, there were Mozilla quiz event at everyhour in community booth and gave a Mozilla t-shirt to the winners. People said that the t-shirt was great and many people came to booth everyhour and participated in quiz event. I thoutght that quiz was relatively easy but some question about Thunderbird and Mozilla itself looks hard to people. It’s the time to think about promotion of Mozilla more.

There are many people and we’ve met many at booth and meet-up place, we hear about Mozilla and Firefox OS a lot, it was a great time to our community members, too. Please participate in Mozilla!